The eeLASIK, a combination of wavefront analysis and Femto-LASIK, is an eye laser procedure with which we individually correct your defective vision and help you to achieve excellent visual quality. Highly precise and absolutely bladeless!

FEMTO-LASIK is the safest, most modern and most customized treatment for correction of nearsightedness, farsightedness or astigmatism. We combined two of the most advanced and precise technologies: wavefront analysis using iDesign and Femto-LASIK.

Just like a fingerprint, every eye has its own unique characteristics, and therefore a treatment needs to respect this uniqueness. With the combination of wavefront analysis and Femto-LASIK, we offer you  an innovative and revolutionary treatment method at your disposal. 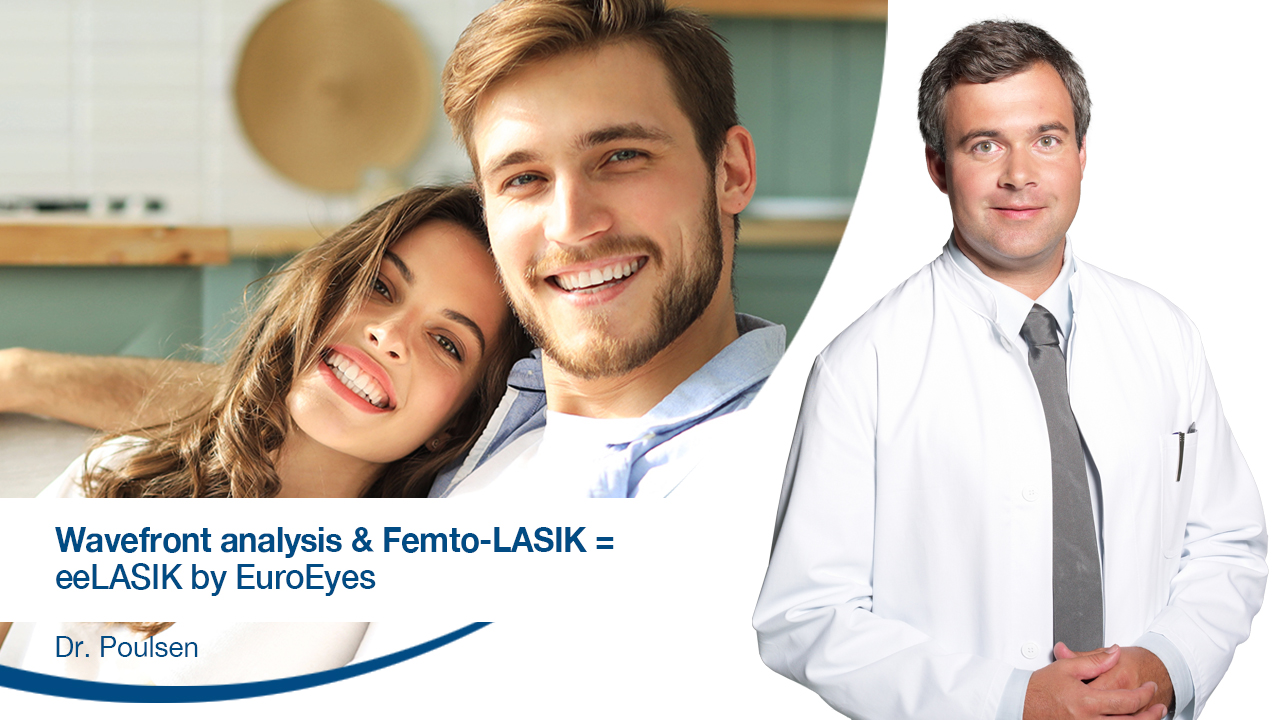 How does Femto-LASIK work at EuroEyes?

Wavefront technology guides the laser to treat the refractive error in up to 1250 different points of vision. Wavefront analysis creates a visual map of the precise refractive power for every measured point – the “fingerprint of vision”. EuroEyes applies this technology to the laser vision correction creating a vision better than with glasses or contact lenses.

The laser safely prepares the corneal lamella (flap) with optimal precision. The surgeon folds back the lap. The laser is adjusted individually for each eye and works tissue-sparing, high-precision and evenly.

The excimer laser uses wavefront analysis to remodel the corneal surface in a customised manner. This removes irregularities in the corneal contour to optimise vision to levels better than glasses or contact lenses.

The flap is gently smoothed back onto the corneal surface. This acts to protect the treated area like a natural bandage. In a matter of hours the corneal has healed.

Combination of Femto-LASIK and wavefront analysis:

For the patient it is one of the best possible treatment methods with decisive advantages:

The Advantages of the Femtosecond Laser in Detail:

3. On the Day of the Treatment

Good to know about Femto-LASIK

Femto-LASIK is a further development of classical LASIK and is one of the most precise methods for correcting ametropia.

Why does EuroEyes now only use Femto-LASIK instead of microkeratome LASIK?

LASIK (laser in situ keratomileusis) has been a scientifically recognized and established procedure for the correction of ametropia for many years and is therefore one of the worldwide preferred surgical methods of many eye specialists. This classical LASIK method has been developed decisively in recent years: to Femto-LASIK.

In order to correct a defective vision with LASIK or Femto-LASIK, a small round corneal cut must first be prepared. The preparation of this corneal cut, also known as flap, is carried out with a micro-knife in classical LASIK. In Femto-LASIK, a femtosecond laser prepares the flap – completely without the use of mechanical cutting instruments.

Safety and Precision with the Femtosecond Laser

Femto-LASIK is a precise procedure for creating the corneal flap. Therefore, when choosing a clinic, you should always make sure that a femtosecond laser is used for eye laser treatment with one flap.

An overview of the advantages of Femto-LASIK compared to classical LASIK:

Technical Info About the Femtosecond Laser

The femtosecond laser is an infrared laser that can treat tissue very precisely with significantly less heat created than other laser treatments – a big advantage in laser eye surgery. Femtosecond lasers work with ultra-short light impulses that need only a billionth of a second to create a spot as tiny as 1/100mm. To illustrate the extremely short pulse time: In one second, light travels 7.5 times around the earth, however, in one femtosecond, it only travels one half of the thickness of a hair!

A specially developed laser system, the femtosecond laser VisuMax from Carl Zeiss, is used for ReLEx treatment. This system has already proven itself in Femto-LASIK procedures due to its sophisticated technology, precision and reliability. Through appropriate further development, it now makes it possible for the first time to prepare a lenticular tissue within the intact cornea with millimetre precision, so that larger incisions and a flap can be dispensed with. In this way, the surrounding corneal tissue is spared as much as possible and the visual defect can be corrected in a targeted manner. A particular advantage of the femtosecond technology, in addition to its high precision, is that it is highly reproducible and can be accurately predicted even when high corrections are involved.

In order to prevent the cornea from being unnecessarily compressed, a contact lens is used which is adapted to the individual corneal anatomy and allows a precisely fitting treatment. This also prevents short-term vision loss, which can be caused by excessive intraocular pressure.

In addition to state-of-the-art laser technology, a functionally sophisticated and ergonomically shaped patient couch has also been developed for ReLEx treatments, which provides maximum comfort and a relaxed position during the procedure. During the operation, the patient’s position is continuously monitored and can be automatically adjusted if necessary.

The Preparation of the Corneal Lamella with the Femtosecond Laser–in Detail:

Contrary to traditional lasers, the energy of the laser beam from a femtosecond laser does not affect the tissue on the corneal surface, but reaches a specific predetermined depth inside the cornea. Very high energy levels can thereby be achieved through intense focusing of the laser beam. The point of focus of the laser beam allows material to be divided at the molecular level (photo-disruption), gently separating the tissue. The surrounding corneal tissue remains undisturbed without damage. The femtosecond laser scans the cornea starting at one edge and works its way towards the other side. The laser beam produces a layer of tiny bubbles in exactly the desired location depth of the cornea. This enables the corneal flap to be opened and lifted to the side like in traditional LASIK. The final treatment with the excimer laser is then identical to traditional LASIK.

The Laser energy is focused at a precisely predetermined depth of the corneal tissue.

A micro bubble consisting of gas and water is generated (diameter: 5 – 12 μm). The bubble expands and separates the surrounding corneal layers.

The aberrometer that is used in the so-called wavefront analysis (aberrometry), is a diagnostic tool that determines the exact objective and quantitative aberrations of the human eye – like a genetic fingerprint. An aberrometer measures the refractive power of the eye – and thus existing irregularities that cause aberrations – in more than a hundred different points. With iDesign, EuroEyes applies the most advanced and innovative technology on the market. In contrast to a regular aberrometer, the iDesign device measures the refractive power of the eye in 1,250 points. All measurements are recorded graphically and create a kind of “map”, that shows the exact refractive power for all 1.250 points of the eye. Based on this revolutionary technique an optimal correction of your vision, customized to the specific requirements can be done by the eye laser. Such an exact and customized treatment is unachievable by any other laser procedure, contact lenses or glasses.

An alternate, common procedure to determine the vision disorder, is the usage of spectacles. However, with this basic method aberrations can neither be detected, nor corrected. A regular LASIK bases on the determination of spectacles. Thus, the correction of additional disorders, like aberrations, is not included in a LASIK treatment. This is one of the reasons why EuroEyes has avoided this type of treatment for several years now, and prefers the advanced wavefront analysis.

THE GENETIC "FINGERPRINT OF THE EYE"

In reality, the cornea often has different curvatures at different points and various forms of image errors, so-called aberrations. Therefore, a specific vision disorder for example -3.5 D does not necessarily equal -3.5 D. Therefore, a laser eye treatment should always be done on the basis biometric, personalized data to ensure a customized, exact and precise treatment.

ADVANTAGES OF THE WAVEFRONT ANALYSIS

The Revolutionary Procedure Improves the Quality of Vision. In the wavefront guided LASIK/ee-LASIK all the collected aberrometry data is considered individually: From the wavefront map it can be derived exactly, in the area of the cornea the treatment must take place, and how much tissue can be ablated – to not only correct the vision disorder, but, by compensating for aberrations, to improve the quality of vision: Thus, a better vision, better contrast sensitivity and a better night vision can be achieved!
This revolutionary and advanced technique offers EuroEyes’ patients the following treatment advantages:

No other method can achieve such a tailored correction and treatment quality.

REQUIREMENTS FOR A FEMTO-LASIK TREATMENT

Is there an age limit for laser eye treatments?

An eeLASIK treatment is at the earliest possible from agw 18.

Should my vision be stable in order to get a laser eye correction?

Your vision should have been stable for one to two years before a treatment. If you are in doubt, come to us and we will carefully check your vision.

Will I be able to see clearly immediately after a LASIK treatment?

As a rule, you will be able to see 80-90% of your maximal vision correction values the day after the operation and within 3 days you will have full visual acuity.

The risk of complications is very low, thanks to the high quality and hygiene standards at EuroEyes. Real complications are extremely rare. To ensure an optimal healing process, it is extremely important that the patient comes to the follow-up examinations, and meets the exact specifications of schedule for eye drops, and follows the instructions they received from us after the treatment. The side effects that can occur with laser vision correction are typically only temporary and harmless, and are fully treatable.

When can I start wearing makeup again, go swimming or enjoy the sauna?

After about two weeks, endurance sports are possible again without restrictions. We recommend eye make-up, swimming or sauna in moderation, after about three to four weeks.

Is there an alternative procedure possible?

*We are speaking English, German and Chinese.